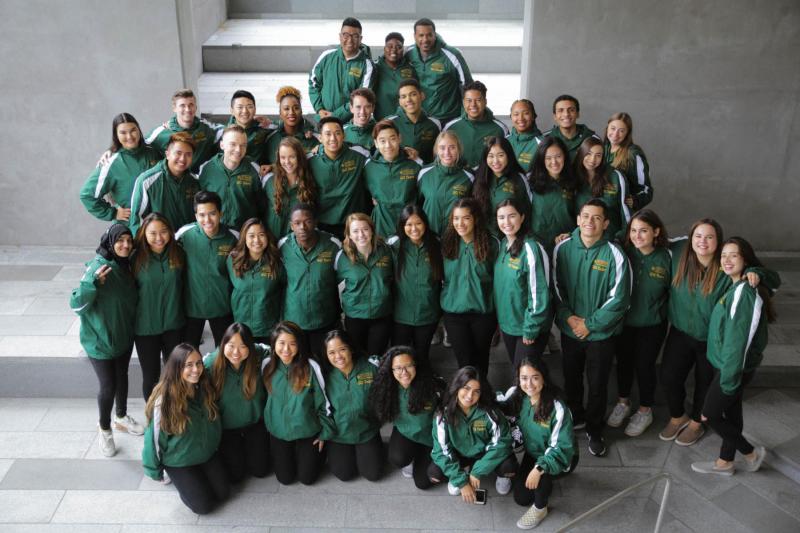 What is GO Team?

GO Team Orientation Leaders (OLs) serve as part of a fantastic cohort of students who act as leaders, mentors, and guides for the incoming class of USF students. They play a leading role in the coordination and implementation of New Student & Family Orientation.

What are the benefits of serving on GO Team?

GO Team members move-in early during August for on-campus residents, receive significant leadership training, and meet lots of new people. Giving back to USF by serving on GO Team is a rewarding experience. New students and their families rely on current students to provide a unique perspective on the transition to college.

What does the training entail?

The training includes leadership development, facilitation skills, USF spirit, the history of USF and Jesuit traditions, campus resources, academic advising, and more. Serving on GO Team can also be a springboard to taking on more advanced leadership roles across campus, such as Team Leader, Resident Advisor, Admissions Ambassador, and more.

What are Team Leaders?

Team Leaders (TLs) are responsible for planning and coordination of small group meetings, evening events and activities, training and recruitment, publicity and communication, student staff staffing and planning, special population orientation programs, and more. Their leadership positions start in the fall, and they help recruit and train our new cohort of GO Team leaders. TLs have already served on GO Team before the start of their service and help new OLs in their role during New Student & Family Orientation.

What do students say about GO Team?

"The most beneficial thing I learned as an Orientation Leader was how to have confidence when leading a group. I was nervous about having my own small group to lead, but having a partner and being fully prepared helped a lot. I learned a lot about USF, and gave me a lot more school pride than I'd ever had." Orientation Leader, GO Team 2015

"The most beneficial thing that I learned from serving as an Orientation Leader is that comfortability is key. When new students are going through orientation, everyone is so nervous and overwhelmed that often it's hard to get comfortable. So sometimes it's best not to have such high energy and force people to talk and go crazy. Sometimes it's best if you can calm down and talk to people. I realized that it's okay to go off-route, to talk and hang out if that's what the situation calls for. I guess the most beneficial thing I learned was how to read a crowd and change my leadership style based on it." Orientation Leader, GO Team 2015

"The most beneficial I learned from serving as an Orientation Leader is that I was able to understand that everyone has a different story and it is important to recognize we all come from different backgrounds. I learned that it is important to listen to others and understand their unique background and experiences." Orientation Leader, GO Team 2015

If you have any questions about serving on the team or the selection process, please Contact GO Team.