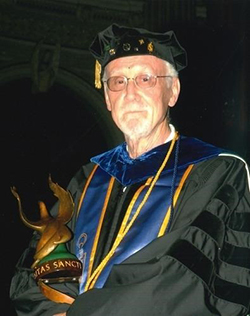 Laurence William "Bill" Murray Jr., a longtime and beloved member of the School of Management faculty, passed away peacefully at his home on September 10, 2022.

Born on February 14, 1940 in Indianapolis, IN, and raised in Belmond, IA, Bill was multi-talented inside and outside of the classroom. He was the quarterback of his high school football team starting in 9th grade, a standout in the classroom, the music scene, and an Eagle Scout attending national and world jamborees.

Bill attended the University of Northern Iowa, where he earned a B.A. in Business and explored his musical talents further, becoming the second tenor in the Mark Five Quintette, traveling the U.S. with the Benny Goodman band at college homecomings, and performing as a solo group at the Black Orchid in Chicago. He went on to earn his M.S. at the University of Missouri and his Ph.D. in Economics and Finance at Clark University.

Bill joined the University of San Francisco faculty in 1978 where he became a well-respected professor and the Associate Dean of the School of Management. He went on to spend 30 years at USF contributing to the further education of thousands of students (along with a treasured stint working with the San Francisco 49ers). He was actively involved during his time in San Francisco with the University of California Berkeley, Beijing Institute for Foreign Trade, Fudan University, China Resources, and enjoyed a 170-year relationship with Hochschule Ludwigshafen am Rhein, where he helped establish the first U.S. MBA program in Germany.

Bill was an avid traveler and resident of the world, visiting over 60 countries in his lifetime. He drove to, around, or through every state of our nation. In his final years, he invited his friends to his ever-famous man cave to enjoy a Giants, Warriors, 49ers, or college football game.

There will be a celebration in his honor at the Handlery Room (Room 100) on Lone Mountain at the University of San Francisco on Friday, September 30th, 2022 at 2:00 pm.

The University of San Francisco community extends its heartfelt sympathy to Professor Murray’s family, friends, and colleagues and gratitude for his countless contributions to the USF community.