The USF Institute for Nonviolence and Social Justice works to advance the theory and practice of transformational nonviolence to powerfully confront and overcome injustice and systemic violence and contribute to the just resolution of communal conflict. In carrying out the mission, the institute promotes the social transformation necessary to create and sustain the “beloved community” that Dr. King embraced and that Gandhi inspired through the principles of amhisa (nonviolence) and satyagraha (truth force). The institute’s efforts focus on the most vulnerable communities as we struggle against racism, poverty and economic injustice, militarism and nuclear weapons, and all forms of dehumanization, violence, and exploitation. Our intention is to be useful to students, activists and thinkers confronting injustice and inhumanity in all forms. 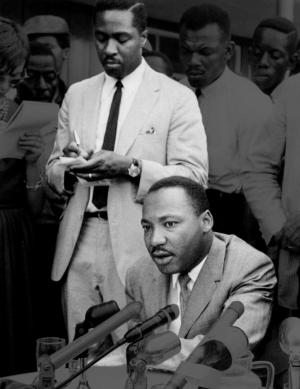 In 2018, Dr. Clarence B. Jones and Jonathan D. Greenberg co-founded the USF Institute for Nonviolence and Social Justice to disseminate the teachings and strategies of Dr. Martin Luther King Jr. and Mahatma Gandhi in response to the moral emergencies of the 21st century. The institute’s history is intertwined with the history of Dr. King’s life's work and the movement he led: Institute Director Dr. Clarence B. Jones served as Dr. King's lawyer, strategic adviser, and draft speechwriter from 1960 until Dr. King’s assassination on April 4, 1968, spending countless hours together in crisis and action, negotiation and decision, intimate conversation and prayer. After 30 years of teaching and scholarship in the fields of conflict resolution, public policy, and international law at Stanford Law School, Greenberg joined Dr. Jones at USF as the institute’s associate director and scholar in residence.