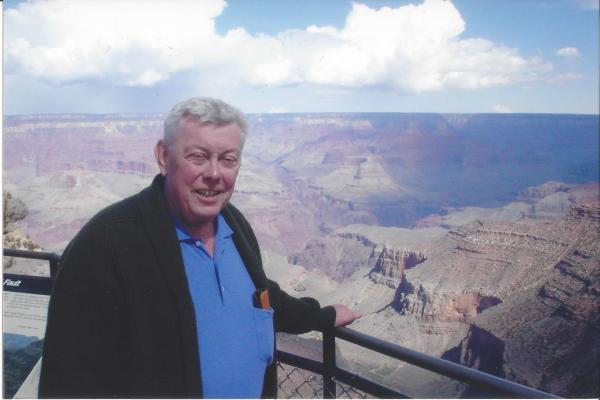 The Reverend Robert Daniel Kendall, S.J., died peacefully in the early morning hours of May 26, 2020, at the Sacred Heart Jesuit Center in Los Gatos, CA. He was 81 years old.

Dan was born in Miami, Arizona, on January 11, 1939, to Robert D. Kendall and Loretto (Jakle) Kendall. Growing up in Phoenix, Dan attended Saint Francis Xavier elementary school and Brophy College Preparatory. He entered the Novitiate of the Society of Jesus in Los Gatos, CA, on September 7, 1957.

During his Jesuit formation, Dan received bachelors and masters degrees from Gonzaga University in Spokane, WA, and a Master of Divinity from the Jesuit School of Theology in Berkeley. On June 6, 1970, Dan was ordained a priest in Phoenix and then went to Rome for further studies. He earned a Licentiate in Sacred Scripture at the Pontifical Biblical Institute (1973), where he studied with Carlo Maria (later Cardinal) Martini S.J., and a Doctorate in Sacred Theology from the Gregorian University (1975), where he was the first doctoral student of Gerald O’Collins S.J., with whom he developed a life-long friendship. Dan referred to Gerry as “lo zio,” or uncle, a term of endearment that Dan himself would be called by friends, but using the Spanish word “tio.”  Over the years, Dan and Gerry authored ten books, including one soon to be released by Paulist Press, Jesuits, Theology and the American Catholic Church.

Dan taught theology at Gonzaga University from 1975 to 1979, and was then missioned to the University of San Francisco (USF), where he served several terms as chair of the Department of Theology and Religious Studies. He also taught abroad regularly in China, Macao, India, and the Philippines.  Dan published many scholarly articles in Theological Studies and The Catholic Biblical Quarterly, and was the book review editor for Theological Studies for ten years.

Dan was highly regarded by his students and colleagues at USF. He was the epitome of friendship, encouragement, and fun. He kept contact with his Jesuit classmates through regular get-togethers, and would often visit friends in Hong Kong, the Philippines, India, Australia, Milwaukee, and Phoenix. Dan had a sabbatical year before retiring in May 2020, after forty-one years of service at USF. During that sabbatical, he spent time in Rome and had a picture taken of himself and Pope Francis with whom he concelebrated a mass in early February. Many mourn the loss of such a vital and wonderful Jesuit.

Dan is survived by his sister, Sister Anne Kendall, BVM. Due to the sheltering restrictions, his funeral mass at Saint Ignatius Church will be live-streamed at 4:30 PM on Friday, June 5, so that Dan’s relatives, Jesuit brothers, university colleagues, former students, and others can virtually attend. Burial will be private at the Santa Clara Mission Cemetery.