Joe Murphy is the Environmental Health and Safety Manager at the University of San Francisco. He has a B.S. in Biology, M.S. in Biology, and an M.S. in Environmental Management all from USF. Additionally, he has doctorate level training in Ecological Toxicology from the University of Illinois at Urbana-Champaign. Whenever possible, he tries to share his knowledge with anyone expressing an interest in bees and beekeeping. 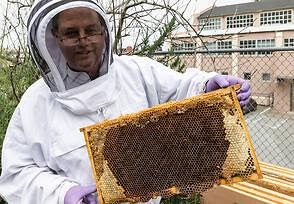 Joe’s interest in beekeeping began about six years ago. Faced with the advance of global warming and the seeming insignificance of one person&#39;s actions in the face of the dawn of the Anthropocene, he reflected on what he could do personally to stem the tide of advancing species extinctions due to pollution, pesticides, and habitat loss all the result of human actions. Given the role, honeybees play in pollination, and specifically pollination of those plants that comprise our diverse food source he decided that beekeeping was that thing he could do to help. Joe read everything he could on the subject in preparation for the real challenge, convincing his wife that having a beehive in the back yard was not going to mean she could never go there again. At first, he wasn't sure himself. But fortunately, no standard back yard can provide the sustenance required of a hive of 60,000 bees. Flying out of the hive they made a beeline (no pun intended) for the nearest stand of Eucalyptus about a mile away.

It is difficult for Joe to select a most memorable moment because, in beekeeping, experiences come in punctuated achievements. But some events stand out more than others, like the first time he stood within 5 feet of a hive with no protective gear, listened to their powerful hum, and realized that they were docile and far too busy to care about his presence. Or the first time he participated in the opening of a hive and saw the intricate workings going on inside. Or the time he hived his first colony of bees from a three-pound package of bees from mail order. And the first time his hive swarmed because he missed the signs but later realized that he really had no chance to stop an instinctual drive millions of years in the making. But if Joe had to pick one memorable event, it would have to be the first time he captured a swarm of bees, approaching the cluster of bees the size of a basketball, hanging from a tree limb, armed only with a bee suit and a cardboard box. Incredibly the book says to hold the box under the cluster and shake the branch. This goes against every evolutionary instinct a bipedal mammal bent on survival has. But you do it anyway, and the cluster falls into the box with a whoosh. Before these bees can explode back out, you quickly close the flaps and step away. The bees on the outside of the box instinctively enter the small hole you've punched into the box to cluster with the queen inside. Within a few hours, they are all mostly in the box, you plug the hole, and carry the box to its new hive. Getting them in the new hive for the first time is another one of those memorable moments.

Joe is by definition a "backyard beekeeper" so aside from the hives at USF, everyone starts off with one hive which quickly becomes two (if you want to avoid swarming) and so on. The most he had going at one time was four hives. Three hives are the recommended number for a backyard beekeeper. In this way, you have a basis of comparison to determine what a strong, medium and weak hive looks like. And you can shift elements from one hive (frames of pollen or honey, bees, brood, queen cells, etc.) to help a weaker hive. His main "go-to" honeybee race is the Italian, in part because they are the most common. They are very docile but can be prone to building up quickly in the spring and swarming so you have to keep a close eye on them. He has also tried Russian and Carniolan strains of the honeybee. Joe lives in Pacifica, a small coastal city about 10 miles south of San Francisco where it can get pretty foggy at times. Those are similar conditions to which the Russian and Carniolan races have adapted.

When he started out he was satisfied if he could just keep one hive going. He didn't even care about honey harvesting. After all, he got into it because he just wanted to help the pollinators survive. But that's the enjoyable thing about beekeeping. Once you think you have mastered one aspect, then you get the itch to try the next thing, and the next, so forth and so on. There seems to be no end to it. And all of these aspects engage your mind, your woodworking skills, and challenge you to adapt to changing conditions all the time. Anyone can be a "bee-haver" or a "bee-watcher", but only a beekeeper has the skills to enter the hive and divine what the bees are planning next.

Craig Petersen is the Director of Operations for Facilities Management at the University of San Francisco. Soon after his arrival at USF he approached his boss requesting approval to establish a beehive at USF to support outreach, sustainability, and for use as an instructional tool for a variety of courses including classes in the Environmental Science and Urban Agriculture disciplines.  Craig is a graduate of the University of California at Davis Master Beekeeper Apprenticeship program.  In 2019 he received a grant from FlowHive (http://flowhive.com/) to develop a roadshow to safely take a frame of bees to schools, youth groups, and retirement communities to talk about pollination, bees, and their importance to our food chain.  He is a 2020 recipient of a Jesuit Foundation Grant to explore Ignatian principles of spirituality through bees and beekeeping.  He is part of a nationwide group of beekeepers who are developing a mentorship program to introduce military veterans to beekeeping to help them address post-traumatic stress issues.  He lives in the Oakland Hills where the honey from his backyard beehive has won first place honors three years in a row at the Alameda County Fair. 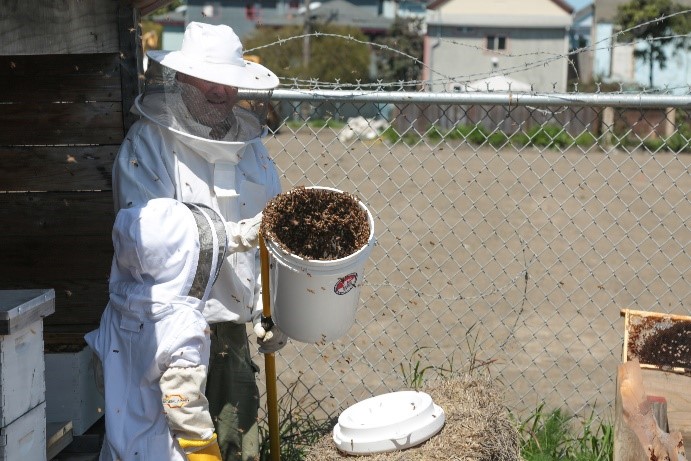 Craig takes pleasure in sitting next to his hive at home and watching their late afternoon activities as the bees return from foraging.  It’s his way of relaxing and making a spiritual connection with the natural world. He finds that watching the activities of the colony can be as mesmerizing as watching a campfire.

Craig has had more than his fair share of excitement as a beekeeper.  Once while inspecting a hive he was stung more than twenty-five times.  That got his attention.  It really wasn’t the bees’ fault he said, but rather he made the rookie mistake of not recognizing the tell-tale signs that they had become agitated.  After a quick shot with an epi-pen, a trip to the emergency room, and the “surgical” removal of his wedding ring from his swollen hand, he was back in business.  He said the scariest part of the whole episode was explaining to his wife why he wasn’t wearing his wedding ring when he got home that night! 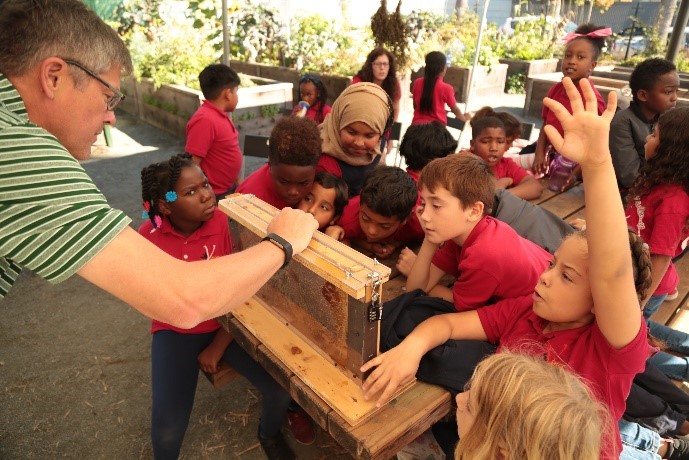 The University of San Francisco is one of only three Jesuit schools in the nation to be
recognized as a Bee Campus USA school (https://www.beecityusa.org/), by promoting
pollinator awareness and pesticide reduction. USF currently has three beehives at their main
campus and another two hives at Star Route Farms. Honey harvested earlier this year took
second place in the local county fair. 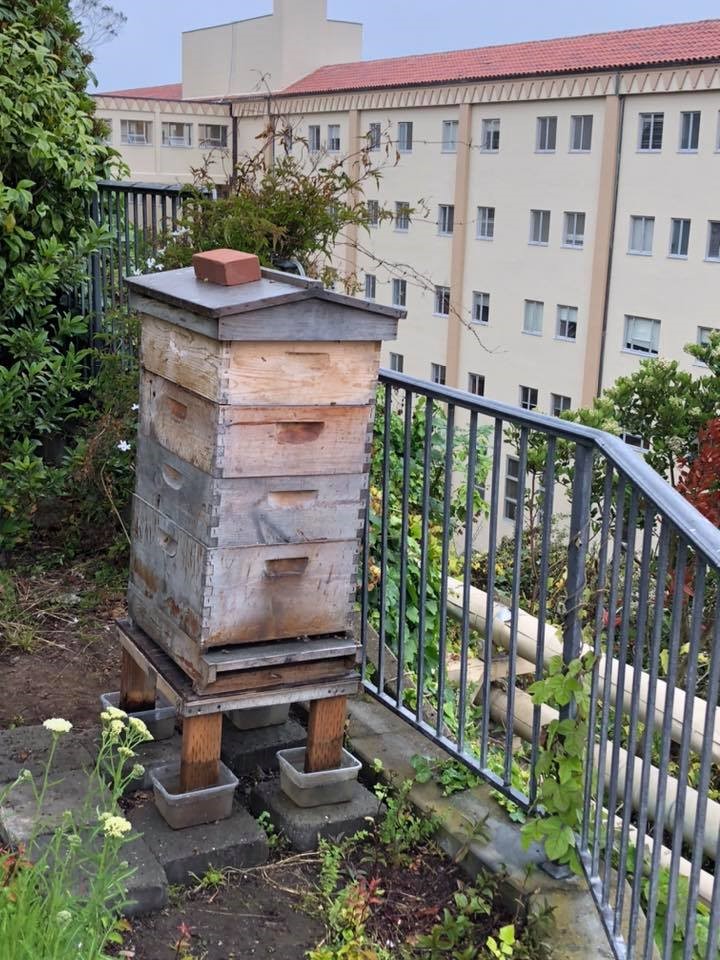